Welcome on board if you are just visiting this site for the first time, it is important to note before we proceed that the meal that you are about to eat now is hot, and spiced with intellectual craftsmanship and garnished with academic creativity. Although, such privileges of writing a paper of this magnitude only avail itself to seasoned academicians and particularly historiographers and historians. Hence, i see this privilege as an August over running excitement which i don’t intend to abuse and bore you. 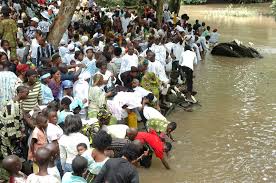 With too many side attractions and eulogizing sermons about the ancient city of Oshogbo the Osun State capital city,my ship finally set sail to match fictions to observed reality. I just hope that i wont be disappointed was the background knowledge that accompanied my surreptitious intuition. Thurs, i decided as a backup tool to also do the needful as a social scientist when the need arise and the need according to Charles Watt(1965) is to “…observe and keep records…”

And finally, here we are as the driver echo in his Yoruba parlance ‘ATIDE OSOGBO O!!!'(whatever that means). All i know is that we have arrive our destination in a journey that seems never ending. Ladies and Gentlemen join me in the next few minute as I take you on a tour THROUGH THE KEYHOLES!! on Osogbo

History they say is a comprehensive analysis of past event but be that as it may, THROUGH THE KEYHOLE is making its own history but first, let me be the first to ask you that apart from the fact that Osogbo is celebrated annually in Osun State of Nigeria, what else do you know about this culturally based people Yoruba dynasty?Well, here are some historical facts you need to know today about Osogbo before we delve even more further:
The origin and story of Osun Osogbo back dates over 700 years ago when a group of settlers led by one great hunter Olutimehin, settled at the bank of the river to escape the famine in their former dwelling place. Osun, the water goddess was said to have appeared to Olutimehin and requested him and his group to move up some bit to higher ground – the present Osogbo town.

Osun revealed herself to be the goddess of the grove and of the river and pledged to protect the group and make their women fruitful if only they would offer the annual sacrifice to her in return. The group agreed and vowed to sacrifice annually to the goddess if she would honour her vows. Today, the annual sacrifice has gone past just offering sacrifices to a river goddess; And today, it has become an international dynasty of cultural events attracting people from all over the world.

The Osun story will not be complete without mentioning her unique festival; the Osun festival started as an annual sacrifice to a river goddess; it later became a celebration of a river goddess, but today an international celebration of cultural events with attendees from all over the world. The Osun Osogbo festival is no longer a cultural event of the Osogbo or Yoruba people, it has become a global event with people attending from Cuba, Brazil, Trinidad and Tobago, Jamaica, Spain, Canada, and the United States.

Adherents or believers in the Osun goddess travel from all over the world to attend the annual cultural event in Osogbo, Osun State. The traditional ruler of Osogbo Town, the Ataoja of Osogbo – HRM Oba Jimoh Olanpekun Larooye II, the Nigerian Tourism Development Corporation (NTDC) representing the federal government, and the Osun State government all collaborate to make the annual event a great success

The Osun Osogbo festival usually lasts for two weeks, and it is celebrated every year in August. The festival commences with Iwopopo, the traditional cleansing of the town from evil, and three days after this the Ina Olujumerindinlogun (16-point lamp), a 600-year-old is lighted. Following this is the Iboriade, an event where all the crowns of the past kings or Ataojas are assembled for blessings by the sitting Ataoja of Osogbo, the Arugba, the Yeye Osun, and a committee of priestesses.

The Arugba (Calabash carrier) is the key feature of the Osun Osogbo festival. She is a votary virgin (a cultural version of the Virgin Mary) who bears the Osun calabash on her head; the calabash contains sacrifice materials to appease and worship the Osun goddess or river. The Arugba is not only seen as a virgin maid any longer, she is regarded a goddess herself and people make prayers and cast all their problems on her as she bears the calabash and passes on to lead the people to the river
The current Arugba, Osuntomi Oyetunji, is the young daughter of the sitting Ataoja of Osogbo. She took over from Abolade Oyewale, who carried the sacrifice calabash to the river goddess and was herself considered a goddess for 10 years.

Please do not think that the Osun Osogbo festival is all about sacrifice in the Osun groves; it is also a celebration of cultural events. Many business organizations and companies now take part in the celebrations – seizing upon the opportunity to showcase their products and sell their services. You can see branded cars, give-away shirts, and promotional business activities ranging from advertising to marketing of new ideas and existing goods.

The story of the Osun Osogbo festival would not be completed without mentioning the huge contributions of Susanne Wenger, an Austrian who since the early 1950s devoted the rest of her life to restoring the glory of abandoned shrines. She renovated the abandoned shrines again and remodeled the gods in sculpture and ceramics, representing over 75 cultural gods in artful representations. Wenger stopped people from abusing the integrity of the groves and prohibited hunting, fishing, felling of trees in the grove, and she personally rebuilt the customary shrines and groves again until her death. She had been briefly married to Horst Ulrich Beier, better known as Ulli Beier in Nigeria for his pioneering works in literature, drama, poetry, and visual arts

According to J.G Ottong(2005), he assert that vagueness and substility has seem to characterize most sense concept in the social science discipline hence the need to always define a specific sense concept is always in use. in addition,Mark Anikpo affirm the above mentioned statement by saying that clarification of concert will lead to the avoidance of doubt,confusion and provide an epistemological understanding as to what is to be discussed.

For the purpose of this analysis, the rat race connotes a way of life in which a people are caught up or trap in a fiercely competitive struggle for wealth without knowing the way or which way out.

The rat race here borders on the way the people have been trying unequivocally to promote their cultures and ethos over and over again without adequate support from the Nigeria State.

As we drive through to the towns i was tempted to ask the cursory question of why is this land that is richly blessed with natural resources under utilized? And I was very quick to draw my sword of conclusion and it was narrowly constricted to the fact that this beautiful city has been subjected to reckless abandonment and isolation to the powers that be before now especially by the Nigeria government hence isolation best explains it all.Isolationism is a very emotional topic. Politicians use it to sway the minds of electorate all the time. They use rhetoric like “Damn the west”! or “We can take care of ourselves”! Gama Abdel Nasser did it, Julius Nyerere did it, Sekou Toure did it, Robert Mugabe is doing it. India did it prior to 1991, China did it under Mao. The truth, however, is that NO ECONOMY HAS EVER PROSPERED BY BEING ISOLATIONIST. Economies prosper when they determine their areas of comparative advantage and convert such into COMPETITIVE ADVANTAGE. The British discovered their flair for seafaring and adventure, and thus built a navy that enabled them to dominate the world economy in the 19th century. The United States portrayed itself as a land of opportunity where anyone could fulfill his/her potential, thus they were able to attract the best and brightest minds in the world to build the nation. The Germans cultivated a reputation for efficiency and quality, which has kept German products in high demand throughout the world. The Chinese leveraged off their huge population (and attendant low labour costs) to attract the highest level of FDIC in history and build the world’s second largest economy. The Indians are building a reputation for excellence in the IT and outsourcing industries. And our Dear Osogbo is still wallowing in squalor of the rat race for over 700 years of her existence with one of natures finest epitome.

just take a minute to ponder on Osogbo with all its historical fabrics and earthly potentials being giving the right boost and its untapped resources rightly utilized. And again just ponder on how its unused resources and cultural efficiency has so far been attracting international figures how much more when its been harnessed. there after lets imagine the gains it will in turn generate into the government coffers and how it will further enrich the Nigeria Government account with. What a tissue to National Development.

it is intellectual to conclude here that this paper primary aim is to draw the attention of all stake holders in the Nigeria dream to adhere quickly to the development and improvements of major cities in the country hence simply put in a more soft tone,The middle east cannot leave globalism because it would run out of food, China cant leave because it would run out of minerals, Europe cannot leave because they would run out of oil. But Africa has all those things, and there is nothing the world can give us that our brains cannot create ourselves! We need to ask ourselves how we can carve out our own niche and prosper based on that. This is the question the government most answer in its quest for a new and better Nigeria (What best way can we improve Osogbo and Nigeria). Nigeria cannot leave without Osogbo because it remains the seat of tourism of the nation. GOD BLESS NIGERIA!!!